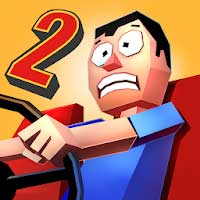 Phil Faily can’t catch a break. This time his car’s accelerator pedal is stuck to the floor and he’s speeding out of control with his vehicle getting faster and faster as he’s trying to maneuver his way through oncoming traffic, hills, tunnels, traffic intersections as well as the police riding on his tail for speeding!

With plenty of hills, thrills and Faily spills, this is the next level Faily Brakes experience the mobile gaming world has been waiting for!

– Destructible vehicles – Cars are now able to take some damage without crashing completely. See the doors swing open and the bonnet of the car fly off!

– A huge range of car customizations – Upgrade your car’s performance, paint, wheels, antenna and even your license plate.

– Bigger ragdoll crashes – Crashing in the game is still just as much fun as playing!

– Race your ghost! Challenge your best run or a direct challenge from a friend!