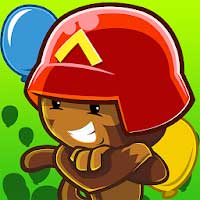 Play the top-rated tower defense franchise in this all new head-to-head strategy game!

Go monkey vs monkey with other players in a bloon-popping battle for victory! From the creators of best-selling Bloons TD 5, this all new Battles game is specially designed for multiplayer combat, featuring 18 custom head-to-head tracks, incredible towers and upgrades, all-new attack and defense boosts, and the ability to control bloons directly and send them charging past your opponent’s defenses.

Check out these awesome features!
* Head-to-head two player Bloons TD
* 27 custom Battles tracks
* 22 awesome monkey towers, each with 8 powerful upgrades
* Assault Mode – manage strong defenses and send bloons directly against your opponent
* Defensive Mode – build up your income and outlast your challenger with your superior defenses
* Battle Arena Mode – Put your medallions on the line in a high stakes Assault game. Winner takes all.
* Card Battles Mode – Choose the perfect deck of tower and bloon cards to outwit and outplay your opponent
* Monkey Tower Boost – supercharge your monkey towers to fast attack for a limited time
* Bloons Boost – power up your bloons to charge your opponent in Assault mode
* Create and join private matches to challenge any of your facebook friends
* 16 cool achievements to claim
* Customize your bloons with decals so your victory has a signature stamp

If you are new to Bloons tower defense games, don’t worry – a helpful tutorial walks you through the game, and matchmaking will help balance the opponents you face. And if you want to battle against your friends, you can easily create and join private matches with anyone on your Facebook friends list.

The choice of strategy is yours – hunker down for the long game, or go for the quick win with a rush of fast Bloons? Jump into a game of Bloons TD Battles now!

PERMISSIONS: Bloons TD Battles requests permission to access to read and write to your external storage to buffer video ads. Video ads help fund the production of our free games, so we appreciate your understanding and support. If there are ever any problems with the amount of data stored, please contact us at [email protected]

YouTubers and Streamers: Ninja Kiwi is actively developing, supporting, and promoting channel creators on YouTube, Twitch, Kamcord, and Mobcrush. If you are not already working with us, keep making videos and then tell us about your channel at [email protected]

Escape to the country in an all new map: Farmyard. Give your opponent the rural runaround by filling the pond with Monkey Subs or the wheat fields with banana farms. Club members can also take part in some industrial action on the new, club exclusive map: Shipyard. Plus we’ve done another round of balance changes to shake up some strategies. Let’s get popping! 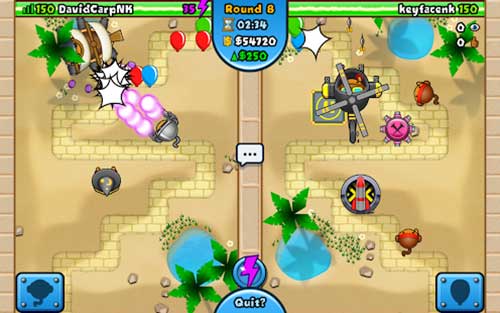