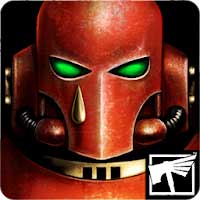 Choose your Legion, build your deck and fight to become a legendary Warmaster! Collect your favourite characters from The Horus Heresy, a key setting of the Warhammer 40,000 universe, and fight in fast and brutal matches. An epic card game (TCG / CCG) with a growing collection of over 1000 cards!

Create a warrior lodge with your friends, discuss deck building, tactics and strategy, and fight in PvP card battles. Choose a side in faction-based card wars that determine which new cards are added to the game. The fate of the Galaxy is in your hands – become a legend!

THE HORUS HERESY CARD WARS: Discover The Horus Heresy, one of the richest settings in the Warhammer 40,000 universe by Games Workshop, for the first time as an online TCG / CCG card game. The legendary forces of Ultramarines, Space Wolves and Blood Angels fight against the traitor Legions of the Warmaster. Hordes of Daemons, once dismissed as mere tales and legends, come forth and slay billions of innocent lives. Play an epic solo campaign, ranked PvP, multiplayer card wars and PvE raids based on battles, stories and legends from the Black Library novels about the Warhammer 40,000 universe.

CARD COMBAT AND DECK BUILDING: Join epic card wars as new Legions from the Warhammer 40,000 lore are added. Play as the Ultramarines, Space Wolves, Blood Angels and many other legendary Warhammer 40,000 factions, each featuring distinct card combat styles and unique abilities to slay their enemies. The card wars and deck building challenges keep growing as new cards are released!

TRUE CARD COMBAT SKILL: Battle in ranked or friendly PvP card wars to prove your card combat and deck building skills. Master the Sealed Deck format, where only tactics and skill determine the outcome of your card combat. Build your best deck and slay the enemy troops before they slay yours. Become a legend!

GUILD WARS: Coordinate with your warrior lodge in epic PvP Arena card battles that determine the evolution of this TCG / CCG strategy card game. Show your knowledge of TCG / CCG games and deck building tips, and try your deck in friendly card duels. Battle other guilds and grow your card collection. Create your own legends!

This update brings epic changes:
● Single-player campaigns! Join the Battle of Phall to discover the lore and mechanics of the Imperial Fists and start collecting their cards.
● New achievements system, which massively expands the number of goals to aim for. Choose which badges to display for extra bragging rights!
● A fresh and polished look for your card collection.
There has never been a better time to be in the game or to start playing. The battle starts now! 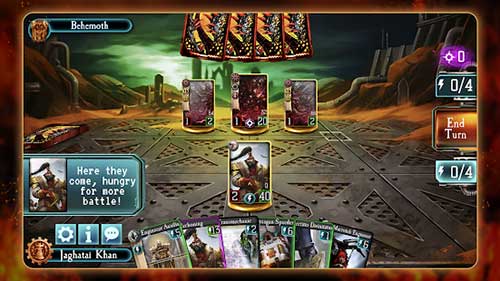