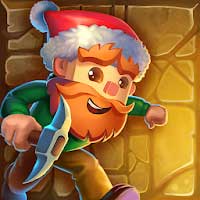 Dig and mine for glory!

Become a gold miner and dig down underground as deep as possible in our awesome casual arcade platformer game. Pick your own lep like tiny hero and join the gold and diamond rush! Dig deep and help restore the bastion! Step into the dungeon of a pixel maze to start your own tiny dwarf hunt for treasure chests! Imagine you have a limited amount of lives, the drill or pickaxe is broken and the leprechaun is about to attack… What would you do in this labyrinth to win the treasure hunt? Start your fun run through underground maze and see if you manage to get out! As bomber dwarf says: “digit, digit, drill, drill”! Gold rush awaits!

Even of you are a top maze runner and not a casual shovel knight, beware of the underground leprechauns ready to get on your mining path and bomber the maze, so make smart use of your pickaxe in a tiny dwarf treasure fortress! Look out for the falling boulders and bomber dwarfs in the labyrinth, craft items, attack with a strategy and discover all secrets of tiny gnomes! Well, gold or diamond collecting has never been easy, but any treasure is worth it, isn’t it? Start now in our casual dwarf game and become the best diamond digger ever seen. Have a whole mine in your pocket and play everywhere on your phone or tablet!

🏆 Here’re some of the game’s totally blowing features: 🏆

★ Randomly generated endless fun run maps
★ Leprechaun traps you’ve never seen before
★ Tricky obstacles everywhere in the labyrinth. Whether it’s a boulder dash or a maze block or even tap blocks
★ Exclusive treasure digger tools to dash even deeper in the gold mine
★ Choose your personal pixel miner character
★ Discover lost or hidden treasure chests and gems
★ Compete with your friends for the BEST DIGGER title!
★ Google Play achievements and leaderboards
★ Support for 10 languages

So, dig the mine and tomb! Mine the more and collect as many gems as you can! It’s a lawless world, but you are always welcome. Try this retro arcade casual game, which needs no introduction, and you’ll stick to this free gold rush mining game forever!

Finding treasure is fascinating, when you dig out! It’s drilling time!

Don’t forget to e-mail us at contact@zimadgames.com with any issues, questions or comments.

Greetings, treasure-hunters! Welcome to the new update!
— New event: “Hunt for hearts”! Find hearts on digs and trade them for gifts in the store!
— Changes to the Stronghold Defense event! Now you can increase damage to monsters in the Arsenal! Cards for all monsters are unlocked immediately! The cost of firing has been lowered!
— Introducing new characters in the Jackpot: Iron and the Jackpot: Crystals events! Dalia and Vertendi are itching to fight!
— 4 new kings