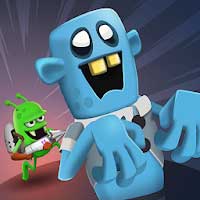 Catching zombies has never been so much fun!

Zombie Catchers is a casual action adventure game in a futuristic world riddled by a zombie invasion! Planet Earth is infested with the undead. But we’re in luck! A.J. and Bud, two intergalactic businessmen, have decided to build a business empire! They plan to hunt all the zombies and make Earth safe once more – while also making a handsome profit selling Zombie juice.

Choose your weapons and traps & upgrade your character to hunt and capture juicy zombies, take them to your secret underground lab, and… profit!

FEATURES
– Hunt down zombies with your trusty harpoon gun and sneaky traps!
– Unlock exciting new hunting gadgets such as nets, weapons, guns, traps, and jetpacks to help you on your quest to catch zombies!
– Create tasty juices, candies, and awesome snacks from your zombies and sell them to hungry customers in your drive-through cafe!
– Build a food business empire by developing delicious new recipes and upgrading your production lines to deliver maximum profit!
– Discover new territories on the map and find unique zombies to collect and squeeze into lucrative food products!
– Dispatch your army of drones around the world to find awesome zombies to catch!
– Lure out special boss zombies and capture them with your harpoon from your flying ship!
– Develop your skill and do perfect catches to climb the hunting ranks to get more plutonium and exclusive costumes for your character!
– Manage and grow your very own underground lab!
– Complete fun daily challenges to get awesome rewards!
– Play offline – no internet connection necessary!

REVIEWS
Read what people are saying about our fun and casual Zombie Catchers game!

“Zombie Catchers is a really good game. The game is entertaining, and the quality of the design and production are top notch.” – Droid Gamers

“It’s incredibly charming and accessible, but hunting all the different zombies can make for a worthwhile challenge as well.” – Pocket Gamer

5/5 “It’s a great game for anyone who likes platformers and catching zombies.”
5/5 “Endless fun with surprises at every corner.”
5/5 “I don’t ever write a review for any games, but I thought I should on this one. I think this game is amazing.”

Did you like this casual zombie game? Did you enjoy hunting them? We would love to hear your feedback!

Hello Zombie Catchers around the world!
We have made the following changes in this update:
– Bug Fixes