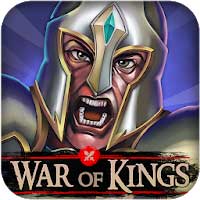 War of Kings is one of the best strategy (RTS) Battle games for Android devices,

The story begins in a world full of wars , conflicts and Clash between clans, you must start in the search for soldiers and allies and you will be the commander and Legend and then build your own clan and empire step by step and fight Kingdoms and enemies in Global War who are near you , King of Thrones!

🌟 Multiplayer “Online Play Mode” :
You can start looking for opponents from around the world and fight them with Friends and win loot and gems to develop civilization kingdoms,

🌟 Without Internet “Offline Play Mode”:
Don’t have an Internet connection?! Do not worry you can play continuously with enemies without the need to connect to the Internet.

🌟 Voice and written chat:
You can chat with your friends during the war and interact with them

🌟 Friends List :
You can send friendships request with others, receive friend requests and play with them

🌟 House of Dragons :
Fight to summon dragons that will destroy your enemies once they are close to your clan.

🌟Soldiers and monsters from several worlds:
There are many human soldiers and other Orcs and un-dead monsters.

🌟 Easy control:
Easy control and there are dozens of tools to easily control soldiers and move them anywhere, clash kingdom try to discover it!

🌟 Many options to develop your clan:
We believe that everyone has their own strategy so dozens of features and tools are provided that make your clan developed and powerful to defeat enemies.

🌟 Use your intelligence:
In the “War of Kings” game intelligence is the key to winning, so you have to devise your own strategies effective and powerful to overcome your opponents.

🌟 Multiple avatars:
You can choose your RPG avatar to be the symbol of your clan.

🌟 Clan Development
When you start the battle with the opponent there is a building called “Academy” from which you can develop the capabilities of your soldiers and increase your resources to make the clan large and powerful ,battle kingdoms.

🌟 Many resources:
You have to make the workers work to collect resources for the survival of the citizens. There are resources of wood, stone, gold and wheat, so you must keep your resources at parity.

🌟 Soundtracks:
War of Kings possesses many wonderful music that makes you in constant thinking to develop your clan to be the strongest!

🌟 Small size and little use of Internet data:
Don’t worry about losing your internet data, we have succeeded in making Kings War game one of the best games that use very little internet data and also the size of the game on your phone.

We hope you enjoy and share the game to friends and do not forget to leave us your opinion and criticism to make the game more interesting. 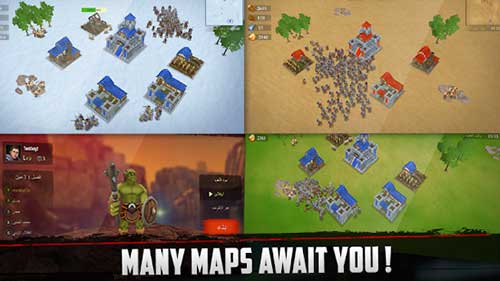