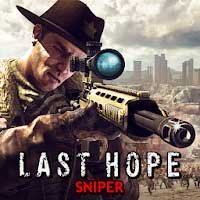 Get ready for one of the best fps sniper shooting games on mobile! Download this offline and free zombie sniper war game now!

Time to gear up and enter the apocalypse wasteland world of Last Hope. Zombies, raiders and vicious deadly enemies roam the wasteland throughout the world. Rescue survivors and kill to stay alive, only you can save the world in this story driven first person shooter game.

You and your arsenal of sniper rifles, assault rifles, handguns and a whole lot of epic skills, including grenades and rocket launchers, is what stands between the last survivors and a full blown pandemic zombie virus outbreak.

Ready yourself, aim in on your target and fire you weapon to prove that you are the best sniper in the shooting games genre. Kill zombies and fight your way through this Non-Stop Action Zombie FPS apocalypse world.

Awesome Features;
– Immersive story based missions: More than 150+ missions and new ones are added all the time!
– Rich and detailed environments: The city has become your battlefield! In this war you need to fight to protect your friends and family in a large variety of different locations.
– Realistic death and impact animations: See your enemies get blown away and come crashing down on cars, barrels or straight down in the pavement!
– Collect skill cards from valuable crates: More than 25+ skills and new ones added all the time! Rocket launcher, shock bullet, poison grenades, missile strike and power shield just to name a few.
– Upgradeable zombie killing weapons: When the apocalypse is at your doorstep you’ll need powerful weapons to stand against it!
– Kill shot camera: Follow the sniper bullet as it travels towards your kill. Get a close up look at your handywork as the skilled marksman that you are!
– Ready. Aim. Fire! Easy and intuitive controls: Be the best sniper you can be without the game holding you back!
– Offline Game: Don’t stop playing just because the internet went down. Play offline and enjoy this FPS game anytime and anywhere!

If you love shooting games, don’t hesitate to download this Non-Stop Action FPS now and play both offline and for free!

We’re an Indie game studio that listens to our players and aim to make this the best first person shooter game possible! We’ll continue to update the game and add even more exciting content!

Season 3 is here with new awards to be earned! 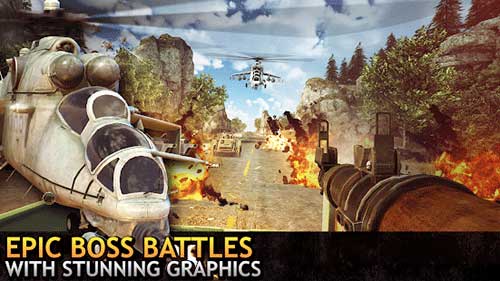