Set against the background of future, when the artificial intelligence develops rapidly. They took control of everything and started to attack humans. Under that circumstance, a secret organization was formed to terminate their command center. The secret forces participate in the mortal speed to approach the command center and destroy them. On the race-track, the warriors in the force need to overcome obstacles and impeders.
Immerse yourself in the adventure on the flaming roads and dangerous speed and challenge with fully equipped racers for you to participate in the fight.
* Race, shoot and terminate all opponents while accelerating on the road.
* Avoid unexpected obstacles on the race-track before fighting against infamous evil bosses.
* Earn lots of coins while racing to upgrade your racer and equipment.
* Own a collection of unique car.
SUMMARY OF GAME FEATURES:
✔ AMAZING GAME EXPERIENCE
– Fight against enemies at a very high speed.
– Confront with the dangerous bosses.
– Overcome many obstacles and traps and impeders.
✔ THE MOST INTERESTING RACING AND SHOOTING GAME
– Upgrade your racer and weapons to pass or destroy opponents’ racers and keep your racer safe on the race-track.
– Lots of equipment and companions while fighting.
– Best free Racing and Shooting combo game ever. 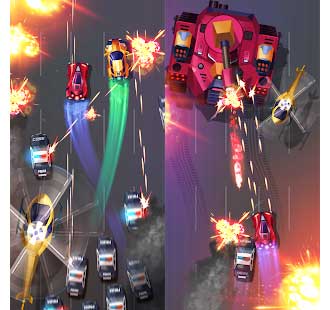