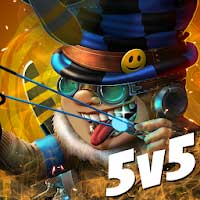 Become a hero you always wanted to be, join Awakening of Heroes players and rise through the ranks of valor to conquer all our Battle arenas with strategy!

* Bomb touchdown
Defeat a bomber, pass a bomb to your teammate and destroy a tower in a football legend style touchdown!

* Jungle rewards
Defeat guardians to get reinforcements, missile or other tangible rewards for your whole team so no enemy vagary will catch your defence off guard!

☆The most dangerous heroes
There are heroes among us: an angry bingo champion granny mage who bakes a killer cake for self defense. Boom! A warm-hearted math professor turned butcher skilled in close combat. Clash! A grumpy old-timer marksman in his invention – a speeding wheelchair equipped with lots of guns – fighting his private war. Bang!

☆RPG MOBA
Collect and upgrade cards, role-playing game style (RPG), to reach legendary levels of your hero’s armor, speed, and damage. Put on a deadly fighter soda can ring (what?!) while a chicken breast armor (what, what?!) gives you the best defence. Gather trophies to progress through 15 arenas 5 v 5 as you climb to the world top league!

☆MOBA evolved
These heroes evolved into gardeners of tower defense. Earn gold by defeating enemies, buy weaponized plants and place them tactically, tower defense style. Each plant evolved to shoot, heal, or serve as a trap or a decoy. Plant your way to victory and reach the stars!

☆Battle royale flying start and loot
The thrill of battle royale online, the fun of 5 vs 5 MOBA games! Parachute into the arena with a hang glider and jump into a brawl! Find mystery boxes around the map just like in a battle royale game and use power-ups to set mousetraps, become invisible or unleash a chicken bomber fleet. Fight for the ultimate survival heroes only can earn.

☆Teamwork for the Win
Work together, support, combine your skills, make war friends and prove you are legends of this extraordinary game. Jungle and get legendary rewards for the whole team. Tank so your teammate can go through the black hole (come again?!) and surprise the enemies by unleashing your minions in the enemy jungle in this mobile 5vs5 MOBA game battle with real opponents and real-time strategy (RTS) matches. 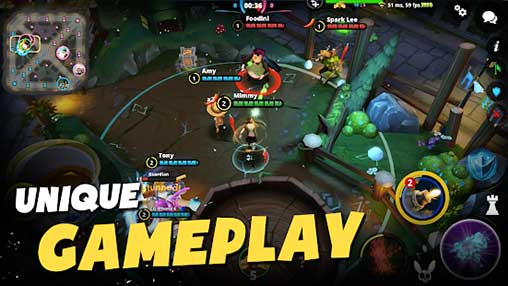